We are very thrilled to welcome Nicolas Pinson to the FH Studio’s team  ! 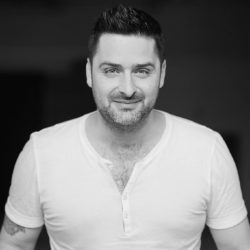 Nicolas Pinson is a director, scriptwriter, actor and animator already well established in Quebec. Since 2015, he writes, interprets and directs the web series “Nico vous mijote”, season 2, 3 and “Les entrevues pimentées”. He recently directed and hosted the web series “Nico en Moto” for the Unis TV web channel. After having been a part of TVA show “Dieu Merci” for 5 years, Nicolas got the part of Martin Matte and Anne Roumanoff’s best friend in the French series “C’est la Crise” presented at Canal + Comédie. He then continues his French adventure in the “FranceKbek” series. He had previously stood out in the series “Pure Laine”, The Invincibles and Big Girl. He also defended the role of Serge in “Ces gars-là”, season 1, 2 and 3.

He is as well the emcee of the National Improvisation League at Club Soda and lends his voice as official announcer of the channel Z Télé. He developed the comic stand-up and made 2 appearances at the Grand Laugh Comedy Club on Canal D, in addition to the Franco / Quebec comedy duo Les Garson.

Need a laughter ? Here is one of his humorous videos with special guest Louis-José Houde, from his web series Nico vous mijote !

Previous
Next
Back to news
Please increase the size of your window to browse the website
Subscribe to
our newsletter
Awesome news, awesome stuff, anyway, subscribe !